Kay Freeman on Ice Skating at Williams Park in the 1940s:
​​Ice skating was popular on Lake Superior on the cinder pond. Some skaters ventured to Chocolay to see the Moonlight and Kent shipwrecks or 10 miles out to Shot Point to see the E.W. Oglebay wreck of 1927. Others traveled the 40 miles to Munising. Around 1920 it was not uncommon to see 2000 skaters on Cinder Pond.

Kay (Hultgren) Freeman
Kay recalls learning to skate around 9 or 10 years old. She lived on Michigan Street and would walk around the corner to join her friends at Williams Park (on Pine and Ohio Streets). The tennis courts were flooded for skating each winter:

Williams Park was kind of our hangout when we were in grade school so we spent a lot of time at Williams Park. And that was when I first got interested in figure skating. Kay Freeman

She skated all day after school until supper time:
There wasn’t any indoor facilities to change your skates and so forth, so we used to put our skates on at home and skate to the park on the sidewalk or the roads. Most of the time we overstayed and had to crawl home on our hands and knees because our feet were so frozen. I remember my mother turning the oven on and I was sitting there in the chair with my feet on the oven door trying to defrost my feet. Kay Freeman
Kay recalled that everyone had skates. She got hers for Christmas. It was part of the local culture as they were “always outside, always out doing something.” In the winter she was sledding, skating, or even playing hockey. In the summer, it was mainly swimming at Shiras Pool at Presque Isle. She also recalls going to many dances and watching the Sentinels play hockey at the Palestra, something everyone seemed to do.

Skating wasn’t a very organized activity then. They had volunteers help them make their costumes and put together their routines. Kay recalls going to the Delft Theatre with her friends and repeatedly watching the movies of the Norwegian Olympic skater turned movie star Sonja Henie. Later they would try to recreate the moves they had watched. Kay skated at the Palestra ice rink and performed in the Ice Follies.

Dave Freeman was a ski jumper who got into downhill skiing. Back in the 1940s-50s, Kay recalls, that ski jumpers didn’t downhill ski: “They knew how to jump and they knew how to stop.” Her husband was a ski jumper when he was younger. When he became a school teacher in Lower Michigan he became the ski club chaperone, fell in love with downhill skiing and became a ski instructor. The family skied downstate and when they visited Marquette skied at Marquette Mountain. Some years they were able to ski at Easter time.

After he retired they moved back to Marquette in 1987. He skied at Marquette Mountain five days a week: He said that Marquette Mountain was the best kept secret in the Midwest. He’d go out, he’d be the first one there in the morning, ski until lunchtime and then come home. It took him only maybe ten minutes to get to the hill and ten minutes to get home. [It was] a lot different than downstate ski resorts [where] you stood in line to get onto a chair lift.

​The Ishpeming Winter Sports Club started the UP wide winter carnival in 1938. These carnivals promoted winter sports as well as tourism to the area. A winter queen was selected each year from various cities. The young women were judged on skiing, skating, speaking, personality, and general appearance. Ice sculptures, including an ice throne were built each year.

In 1941 a 200’ long ice ship, The USS Marquette, was built under the design and leadership of Ed Paviglio, near the Palestra, on Fair Avenue. At the time it was one of the largest ice sculptures built in the US.

​Marquette held dog races on Washington’s Birthday. They were on Washington St. between Front and Third. Joe Smith planned the event, which was held from 1912-1923. Joe was a barber and he and the other merchants donated prizes for the boys who entered their dog in the race. In Ishpeming dog races were also held on New Year’s Day in Ishpeming.

The UP 200 Dog Sled Race was first run in 1990. It was the dream of mushers Jeff Mann, Scott and Elise Bunce, Tom and Sarah Lindstrom along with LouAnn Balding of the Marquette Chamber of Commerce. The race attracts a crowd of thousands at the start from downtown Marquette. The 12 dog, 230 mile race is a qualifier for the Iditarod Race and attracts racers from around the Midwest, Canada and Alaska as well as local mushers.

Companion races include the Midnight Run which is 90 miles with eight dogs and the Jack Pine 30 which is 26 miles with six dogs.

The natural luge track on Lucy Hill in Negaunee was built in 1990. It is the US’s only full length natural luge track. Natural luge has flat curves made by snowbanks, unlike Olympic Luge which runs on an artificial track. The track has hosted international training and competitions.

Lucy Hill is home of the UP Luge Club. The track is open to all ages and abilities. Sledders receive instructions and equipment before their first run. Some club members compete in international luge competitions.

Before Lucy Hill was built, Marquette had an artificial track at Kaufman Hill built in 1982 (earlier known as Kirlin Hill). The Head of the US Luge Association proposed the idea to Karen Kunkel, Director of the Great Lakes Training Center here in Marquette. The early tracks hosted Jr. Olympics and Naturbahn Nationals.​

​Tobogganing has long been popular in this area. The toboggan track at Al Quaal was installed in the 1930s. In the late 1800s people in Negaunee sledded near Teal Lake at Ridge and MacKenzie Streets. In Marquette, Chipmunk Hill in South Marquette was a popular sledding spot for all ages.

Early in Marquette’s history, people slid down many of the roads such as Front Street. In 1888 a toboggan run was built on Pine Street as a commercial venture. Twenty cents got you 10 rides. The structure burned down and was not rebuilt.

Homemade bobsleds were used on some of the hills of Marquette. A ride down the iced Grove Street (before the highway was put in) might send you all the way up to Fisher Street. Once up Fisher, one could coast down again, then turn and ride north up Front Street towards the business district. The ride ended with a great deal of hand waving.

Early skis were often made out of two barrel staves, and a sled could be fashioned out of a cheesebox. 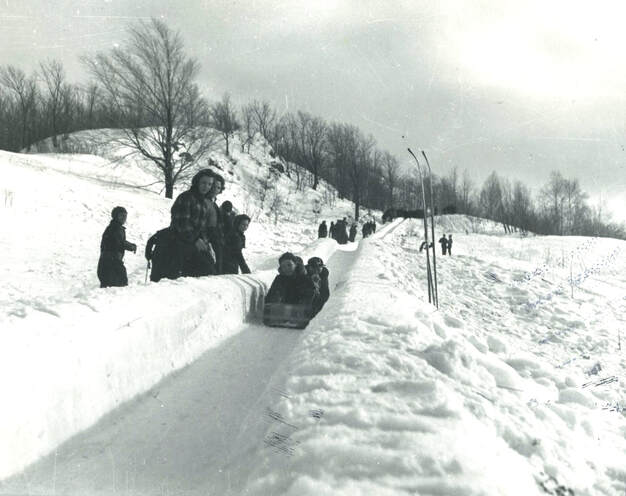 Return to The Great Outdoors: The History of Recreation in Marquette County Special Exhibit ​
Thank you to all who contributed photographs to be used in this exhibit. Historic photographs are from the J.M. Longyear Research Library at the MRHC.